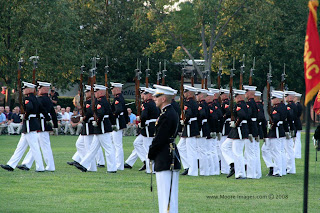 I often visit downtown DC to take photographs of the various memorials. Whenever I visit downtown, I see many students buses and families enjoying the sites. I told Deborah that I want her and the girls to occasionally come with me and enjoy the sites.
I discovered that the Marines Silent Drill team would perform at the Iwo Jima Memorial at 7:30 PM. So, I told my friend David and he decided to attend. Afterwards, he was not going to come because he had his son. Instead, I told him I’d bring my daughter since they knew one another because they attend the same school. With that said, I ended up bringing the entire family.

Nevertheless, we arrived at the site nearly 50 minutes before the supposed start time. However, I got a phone call telling me that the performance actually began at 6:30!
As we arrived, I realized many more people brought their family. Therefore, I parked at a garage nearly a mile from the memorial site. I did not have the $12 on me for the fee. However, the attendant let me park anyway and I provided him with the rest when I returned to get my vehicle.
I run to the site with two folding chairs, a tripod and my camera bag! 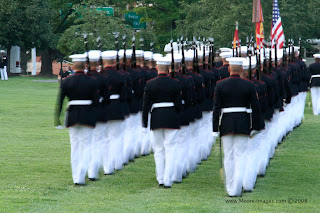 The performance was pinpoint accurate. The Marines performed their craft with such precision that the hassle to see the event was worthwhile.
The photos were taken using a slow shutter speed to emphasize the motion of the soldiers.
-Rog
If you enjoyed this post, make sure you subscribe to my RSS feed!