The Martin Luther King Jr. Memorial was being dedicated the day I flew to Denver, Colorado.  It was bittersweet for me to watch because it represented the second time his memorial was being dedicated and the second time I wouldn’t be able to attend.  However, by the end of my trip, I could say like Dr. King, “I’ve been to the mountaintop!”  I did “drive” to get there; I didn’t “hike” it! 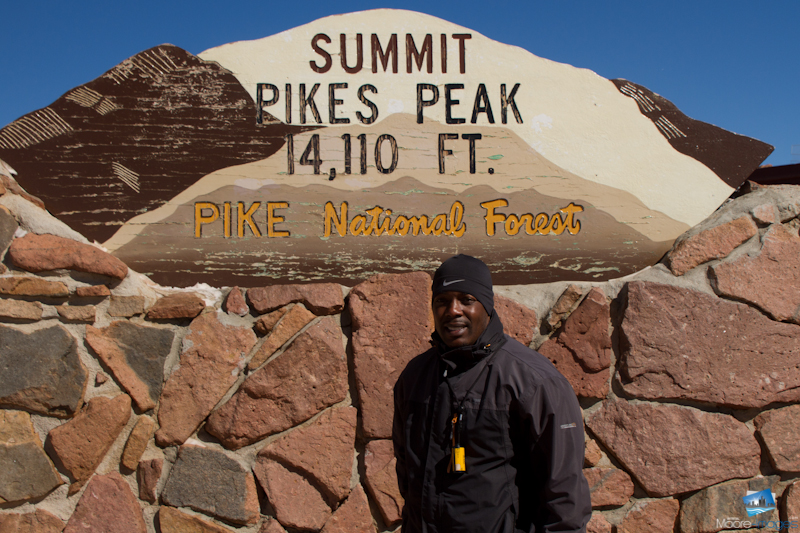 I initially visited Colorado in 1995 when I had an interview with Hewlett-Packard.  I brought a small film camera with me.  My trip sponsor and his wife drove me through some of the mountains.  With my camera, I was disappointed in the images I took because nothing I did could capture the story of these amazing subjects.  Now, 16 years later, some better equipment, and improved photographic skill, I returned seeking another opportunity to tell their story.  As I drove to my hotel, I was in awe of the sky colors and the landscape.  Being in such a high altitude, the air is much clearer and the mountains provide an incredible backdrop.  I’ve seen many beautiful images of the Colorado Mountains but there is no substitute for their immense beauty in person. I want to digress for a moment.  I asked my fellow “photogs” to critique my blog.  One response I received was to omit references about God and stick to the subject of photography.  I understood why this was said and I appreciated the input.  I presume the person didn’t want me to offend, irritate, annoy, etc., someone who doesn’t share my belief.  However, as I drove to my hotel, I was in awe of God’s work.  I was overcome with how miraculous it all looked.  The sun painted the sky with beautiful pastel colors.  I don’t believe all this is merely the result of forces from earth’s plates compressing the surface into an upward slope.  I believe this is the result of God speaking it into existence.  Now, back to my story. Part of my pre-travel ritual is to research areas for good landscape photography.  This was an easy chore with Colorado Springs.  The only problem was whether I would have enough time to enjoy them.  After work on Monday, I visited the Garden of the gods. I grabbed a map from the Visitor’s Center, asked where were the best spots, and I was on my way. As I drove around the garden, I pulled over several times at designated areas.  Yet, some areas I had to walk to because the stop locations did not provide the best view.  I had to be careful as I noticed a person with a camera in one hand and the steering wheel in the other.  Considering that the roads were narrow and very hilly, she was an accident waiting to happen. I ended my trip with a second trip around the park and a visit to one of the most famous formations in the park, Balanced Rock.  There are several “balanced rocks” in parks throughout the world.  Another one is located at Arches National Park in Utah. Babies are born with only two fears, falling and loud noises.  Every other fear is learned.  The latter no longer bother me but the former is still hanging around.  I get nervous whenever I approach a balcony in a top-level hotel room.  However, I continuously confront this fear by riding the tallest roller coasters or hiking along the side of a cliff. Pike’s Peak is the easternmost and one of the tallest mountains in Colorado.  At 10 miles from Colorado Springs, it was a few minutes drive to the entrance.  However, it took nearly two more hours to arrive at the top. Entering the park, the attendee told me to continue to breathe as I drove and to put my car in first gear when I came down as people sometimes melt their brakes by constantly riding them on the way down.  Initially, the ride was slow, steady and mostly uneventful.  I took a few photos at the pull-over locations, however all that changed when I arrived at the first Visitor’s Center.  The following image is from that location. The store manager told me about the mountain lions and bears in the mountain.  He assured me the lions would be more scared of me than I would be of them.  A couple who reached the top and were on their way down shared their experience with us.  I nearly changed my mind when I was done talking to them.  The man told me how the road changes and it no longer has trees on the side of the road.  Instead, the road narrows to a single lane for traffic in both directions.  The road has the cliff flush against it and the other side is a steep drop.  When I got into the car to continue my trip, I began to doubt whether I wanted to do this.  As I ascended, I refused to look to the side as it would’ve made me nauseous.  I focused on the double-yellow lines making certain I never got to far from them, especially when the cliff was on my right.  The most harrowing part of the journey came when I drove on the outside lane with the cliff on my side and the road transitioned into a steep grade.  Driving up the mountain, I could not see the road that much further ahead and I was at such an elevation that I no longer saw the horizon.  I only saw the clouds in front of me and to the side of me (whenever I dared to look).  I was at 13,000+ feet in the air.  There were instances where I was driving through the clouds that made the trip even more nerve wrecking.  I felt fear rising up as I wondered what the heck made me even decide to do this.  There was absolutely no room to turn around.  I had to proceed or else.  Fortunately, I had my GPS programmed with the coordinates of the summit.  Therefore, I knew how many miles I had remaining. I arrived at the top and was overcome with a sincere appreciation for what I accomplished.  After that, I opened the car door and was overcome with a great burst of cold air and wind.  The temperature at the summit was below freezing and the wind was at least 30-40 MPH.  The lack of oxygen made me light-headed and I walked slowly to avoid fainting.  I grabbed some photos and had some taken of me as proof of my accomplishment.  Next, it was time to make my exit. It was much easier going down as I knew what to expect.  I went back to the Visitor’s Center and showed the manager my photo in front of the summit marker.  He seemed more excited than I was.  I continued my trip out the park buzzing about my latest accomplishment. This trip reminded me of the hike I did with my sister in Italy.  Whenever we face obstacles, there is always something we can reference from our past that we’ve overcome as well.  We must use those experiences to encourage and propel us to the next level.  I don’t plan on traveling any higher than this without the aid of an airplane.  Yet, I know that whatever my next challenge is, I have multiple experiences to call upon to help me along the way.

P.S.  My average speed was 10-15 MPH and it took me over an hour and a half.  The manager also told me they have annual races up the mountain.  They average speed is 75 MPH and the best time is under ten minutes!!!  I guess people at that speed don’t stop for photos.

6 thoughts on “My Mountaintop Experience”